[If you haven’t been keeping up with my travels, you can check them out here!]

I had a nice relaxing morning (again) while Nick and Liv were at work, and then we went to Molly’s for brunch!  It was DELICIOUS!  I got French toast with honey (no syrup in Taiwan – the travesty!), french fries, eggs, and sausage (much sweeter than in the states).  And there was a FORK.  Yay for Western food! 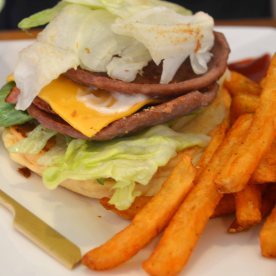 Then, we went around Magong City.

“Four-eyed well was probably dug in the Yuan Dynasty, when the  Lower Street villages were densely populated and moved to  Upper Street. Since people cannot live one day without water, when ancestors reached the  Upper Street, they must have dug this well first as a source for water and for public use. This Four-eyed Well is about three meters deep and two meters in diameter. There is a stone slate covering the well opening, leaving four circular openings to retrieve water, such peculiar design structure is what gave it its name. (Source)

One of the older streets in town, decorated with Chinese lanterns.

A temple crammed between 2 buildings. 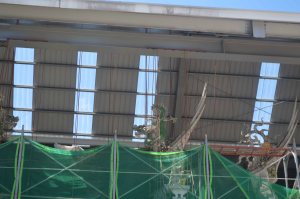 The oldest Matsu temple in Taiwan – it is currently being restored. You can see the paint has been stripped off, and they are beginning to repaint it.

Another view of the reconstruction of the oldest temple in Taiwan 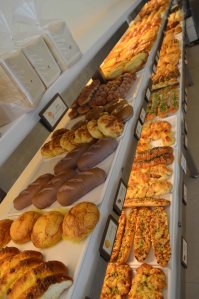 Snack time! The bakeries here are pretty incredible. This is Donutes. Check out the variety!

After we went home and cooled down for a bit, we went back out so Nick could teach me how to drive the scooters… I was dreading this and had been able to put it off for a few days.  I did alright… at first… 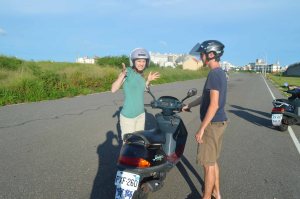 “I don’t wannnnnaaaaa. I’m gonna break something or someone!”

“Now you want me to turn?? Can’t I just keep going straight til I get to the ocean?”

And then, a little bit later, I ran into the brush.  I apparently can (kinda) turn left, but not right.  Maybe we’ll try again today…

For dinner, we went to “The Loving Hut” – a vegetarian restaurant where a video of an… interesting… belief group of some kind was on the screen.  I ordered pumpkin dumplings and then traded with Nick for his pumpkin noodles.  Thankfully, their friend could speak Chinese and requested a fork for me.  I was about to have a messy encounter with chopsticks!

Then, we went to check out the Xiying Rainbow Bridge – an awesome walking bridge in Penghu.

With Nick & Liv & friends at the Rainbow Bridge 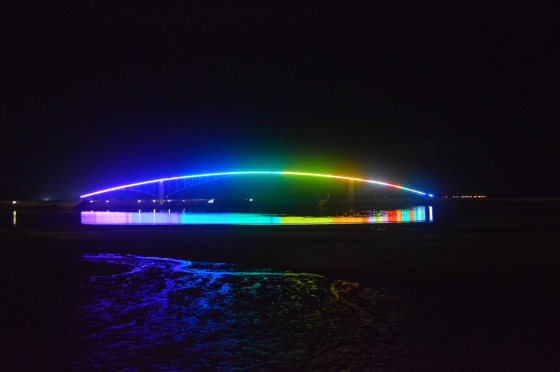